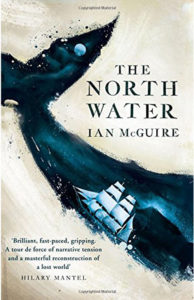 This is the second novel from the pen of Simon McGuire and already he has established a distinctive style. Set against an arctic backdrop at the end of the sailing, whaling era, The North Water is a tail of skullduggery, deceit, brutality, and hardship. Through a pacy narrative, McGuire contrasts the themes of human frailty and weakness against endurance, resilience, and triumph.

His prose is raw, often vicious, but totalling in keeping with the era he writes about, which is immediately engaging. The same applies to his characterisations: sharp, acerbic, raw, and believable. It’s a writing style that drags you into the past and makes it seem real.

The plot is straight forward and, to some degree predictable, but the story-telling is lively, entertaining, and fluid, with a few twists along the way. Ian is brilliant at introducing the minutiae of history into the storyline, which provides a richness to his writing. However, he does write in the present tense thereby breaking with common form, which I found it slightly irritating.

The North Water is well worth the read: pacy, entertaining, and exciting.