How science is revealing their secrets 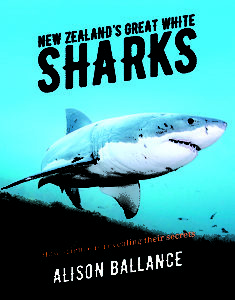 For many of us, the great white shark was propelled into our consciousness by four letters, JAWS. The 1974 novel, about a rogue killer white shark, propelled Peter Benchley to international acclaim and the great white to international infamy. The title was undeserved and Benchley later regretted writing the book and, in fact, spent the rest of his life advocating for oceanic conservation.

Finally, four decades later, a book has been produced that sets the record straight and does a great service to this magnificent ocean predator.

Apart from folk lore and anecdotal evidence, very little scientifically was known about the great white until comparatively recently, and much of the contemporary research has been conducted in New Zealand and Australian waters by shark biologists Malcolm Francis (NIWA) and Clinton Duffy (DoC). Allison Balance has followed this study, called ‘The Great White Shark Project’, for a decade, so is well qualified to pen this book, which is essential a mixture of natural history text book overlaid with non-fiction adventure.

As we have come to expect from Potton & Burton, the production values of this book are high: hard cover, full colour, liberally illustrated, and beautifully laid out. The narrative is aimed to appeal to a broad audience, from young adult to adult, so is quite prosaic and informative but nonetheless engaging and crisp in its delivery. The book leans more toward an educational read that can easily be picked up and put down, and read in stages, than a cover to cover comfort read.

However, mixed in with the fascinating facts and discoveries about the great whites, is the human element and a story of passion and compassion. The key protagonists have clearly developed a deep love and respect for this giant predator but the triggers to this interest are as fascinating as the individuals. From the visual epiphany of a four-year-old to a near death underwater encounter, the catalyst has brought this team together with a driving desire: to find out more about this incredible fish and, through knowledge, understanding, and education, shine a healthy light on the future of New Zealand’s great white sharks.

Highly recommended as a resource, good read, and a gift.