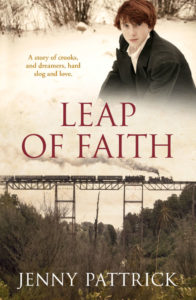 If you’ve not come across Kiwi writer Jenny Pattrick before, you’re missing out. She ‘owns’ the New Zealand historical novel genre. Her best-known works – The Denniston Rose and its sequel Heart of Coal – are set in the coal mining towns of the West Coast.

For Leap of Faith, she moves up country to the middle of the North Island where workers are being pushed had to complete the main trunk railway line. There is a bet between the construction engineer and the government man on whether it will be finished in time for a planned trip between Wellington to Auckland by parliamentarians and dignitaries, the purpose of which is to demonstrate that the enormous cost is justified.

The stretch of country still under construction is between Ohakune and Taumarunui, an area of steep mountainsides and deep gullies. The looming completion date means corners are cut, and workers are pushed to – and sometimes over – the limit of their endurance in what we would today consider to be inhuman conditions.

This area is still renowned for its huge viaducts which are astonishing feats of engineering given the era – early 1900s – and the tools available. The Makatote Viaduct is 2262 m long and 79 m high. It joined 32 other major viaducts and 26 bridges, making the North Island main trunk line an impressive project by any standards.

The story of how this section of the railway was built is told through the lives of those who built it, those who planned it, those who provided ancillary services – and those who tried to cheat, con and lie to the real heroes of this endeavour.

There are the predictable stereotypical characters – the conman preacher, the middle-aged matron waging war on alcohol, the gullible young boy besotted by the preacher – and some less so. The marriage of a white woman to a Maori man causes ructions in both families.

While a novel, much of Grace’s book is based in fact. It is also partly the story of her own family – her grandmother Rose, and Rose’s brother. It is a story that has been waiting a long time to be told and it has now been done so in style and with delicacy and grace.